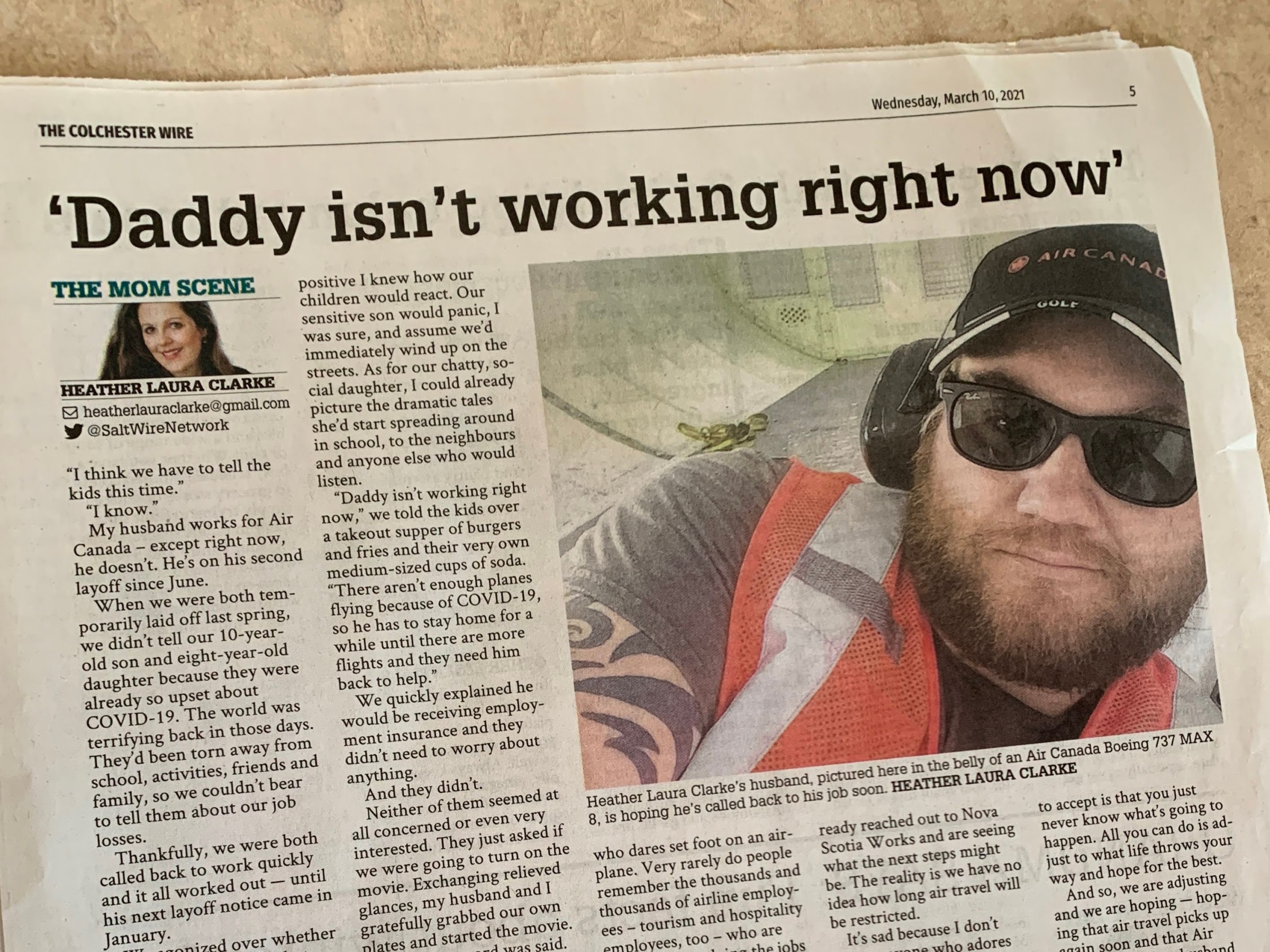 “I think we have to tell the kids this time.”

My husband works for Air Canada — except right now, he doesn’t. He’s on his second layoff since June 2020.

When we were both temporarily laid off in the spring, we didn’t tell our 10-year-old son and eight-year-old daughter because they were already so upset about COVID-19. The world was terrifying, back in those days. They’d been torn away from school, activities, friends and family, and we couldn’t bear to tell them about our job losses.

Thankfully, we were both called back to work quickly and it all worked out …

… until his next layoff notice came in January.

We agonized over whether or not to tell the kids, but eventually decided that we had to — mostly because we’re more jaded this time around. Last spring, everyone was dazed and shocked and kept saying everything was “unprecedented.” Now, almost a year later, we’re more aware of how bad things really are (especially for those in aviation) and how long this latest lay-off might last.

I Googled “how to tell your kids you lost your job” and learned that we needed to be honest, remain calm and provide plenty of reassurance.

No matter how carefully we phrased things, I was positive I knew how our children would react. Our sensitive son would panic, I was sure, and assume we’d immediately wind up on the streets. As for our chatty, social daughter, I could already picture the dramatic tales she’d start spreading around to the school, the neighbours and anyone else who would listen.

“Daddy isn’t working right now,” we told the kids over a take-out supper of burgers and fries and their very own medium-sized cups of Sprite. “There aren’t enough planes flying because of COVID, so he has to stay home for a while until there are more flights and they need him back to help.”

We quickly explained that he would be receiving Employment Insurance (“money from Justin Trudeau for people who have lost their job”) and that they didn’t need to worry about anything, and … they didn’t!

Neither of them seemed at all concerned, or even very interested. They just asked if we were going to turn the movie on! Exchanging relieved glances, my husband and I gratefully grabbed our own plates and started the movie. Not another word was said.

Since he’s always worked unusual hours and often overnight shifts, the kids haven’t commented or even really noticed that their dad is now home 24/7. He’s keeping busy with a big renovation to our basement — a project that would have taken three times as long if he were still working — and their lives are the same as usual. It’s like he’s on vacation or days off, except it goes on and on.

It’s hard not knowing how long travel is going to be restricted, and it hurts to see dozens of Facebook comments condemning anyone who dares set foot on an airplane. Very rarely do people remember the thousands and thousands of airline employees — tourism and hospitality employees, too — who are forced to stop doing the jobs they love, in the name of public safety.

While the world is hopeful about the vaccine and making plans for when life returns to “normal,” airline families have the bleak understanding that the pandemic is far from over. My husband could be called back to work any minute now, or he could be off for a year — or longer.

Should he take a course and try out a new career? Should he take on a new temporary job? We’ve already reached out to Nova Scotia Works and are seeing what the next steps might be, because the reality is that we have no idea how long air travel will be restricted.

It’s sad because I don’t know anyone who adores their job as much as my husband. His face lights up when he talks about his shift at the “jet ranch,” the newest Boeing he’s dying to see, and the jokes he shares with his buddies as they handle luggage and drive tug tractors and wave the planes in and out of their gates.

We’re almost a year into the COVID-19 pandemic — something I once naively hoped would be “wrapped up in a couple of months” — and the biggest lesson I’ve learned to accept is that you just never know what’s going to happen. All you can do is adjust to what life throws your way, and hope for the best.

And so, we are adjusting and we are hoping — hoping that air travel picks up again soon, and that Air Canada needs my husband back at the airport to help safely move passengers and freight. Daddy isn’t working right now, and all we can do is wait.

This column was published in SaltWire weekly papers across Atlantic Canada in early March, 2021.

← Our kitchen makeover … on TV!
The magic of something new →