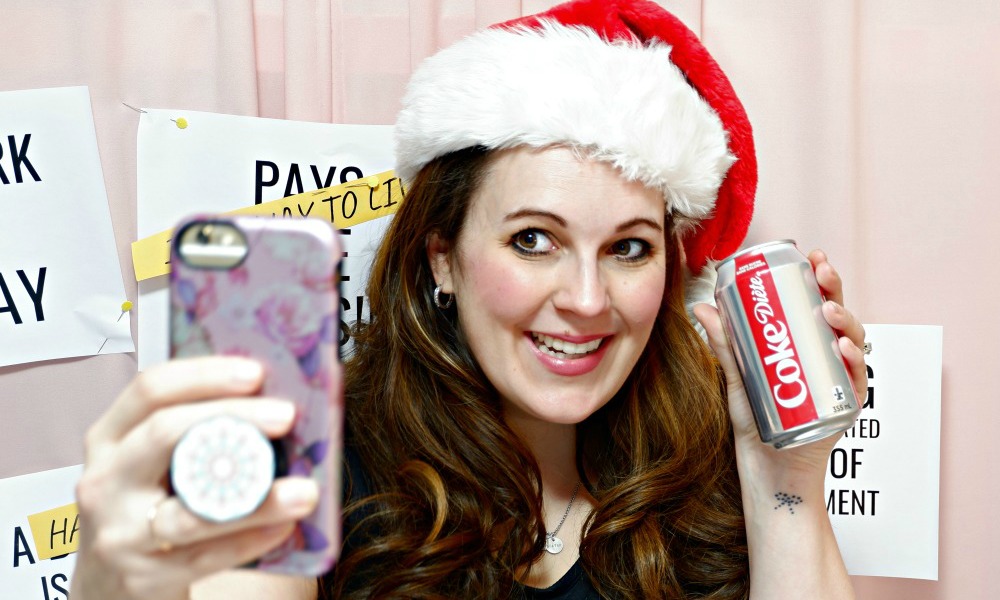 It can be lonely working from home, especially in December when it seems like EVERYBODY ELSE gets to go to a company Christmas party.

That’s why I always throw myself one …

But this year? The boss a.k.a. ME wasn’t keen on having a party.

“There’s so much to do!” she kept yelling. “We’ll never get it all done! All hands on deck! No rest for the wicked!”

Honestly, it had the whole team feeling pretty stressed out.

I found myself daydreaming of parties from years gone by …

I thought the boss might have had a change of heart. She brought down lunch!

… but it was just her leftovers from the previous night. *sigh*

Things seemed promising when she handed a card to each employee, but … once again, we were underwhelmed …

Even though we weren’t having a party, she distractedly handed out the service awards. I’d won Employee of the Year for five years running, so I was feeling pretty excited until … what???

One thing I always count on at our corporate Christmas parties is a nice cold Diet Coke. So when the boss said she’d pass out drinks, I was NEVER expecting she’d pull a stunt like this …

It was time for a wake-up call for our mean, terrible boss!

I’m pleased to report that she reconsidered and I *did* win Employee of the Year — six years running, now!

My colleagues and I finally started to relax and get into the festive season with a few selfies. #lovemyteam #workfriends

And then? It was time for some REAL LUNCH …

My boss may have needed some MAJOR convincing, but I’m glad she finally realized that we need a party. You can’t work yourself to the point of exhaustion every day. It causes wrinkles.

Nothing sweeter (er, asparatamier?) than a holiday party Diet Coke!

Thanks for “joining” my little Christmas party-for-one again this year! Wishing all of you a very merry Christmas and a Happy New Year!

P.S. Two of my self-employed friends also threw themselves holiday parties. Hop over to Eat, Drink and Be You to see Kerra’s party, and then stop in for a cuppa on the farm — Farm Fresh Style, to be exact — and see Lori’s party.

Category: Freelance, Holidays, It's all about me, Solo Christmas parties

← Rocked by the report card
Bright and organized bedroom →