There’s this little movie. Maybe you’ve heard of it? It’s called Barbie: The Princess & the Popstar and it’s possibly one of the best movies ever made.
Well, no, not really. But I did pay money for the soundtrack because I wanted to listen to it in the van, so that’s saying something.
The kids beg to watch it constantly, so it was no surprise that Miss C wanted to be the popstar, Keira, for Halloween. (She’s the girl in the purple, if you haven’t had the pleasure of watching this piece of cinematic genius).

She declared I would be Princess Tori (the one in the pink), and I’m cool with that because I’ll take any excuse to wear my wedding dress again (stay tuned).
So we were on the hunt for tall purple “popstar boots, just wike Keewa.” I knew it was the perfect time to try one of those “DIY duct tape boots” tutorials I’d seen on Pinterest. I bought two rolls of purple duct tape and figured I’d look up the instructions once I got home. 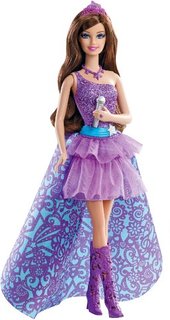 They all require ruining a pair of shoes to go inside the boots (no, thank you). They also require buying eyelets and grommet punches and all sorts of things, as well as sewing some kind of flap to fold over the top of the boot? Oh no. Sorry. Not happening.

Did I mention these costumes are a lot of work in themselves?!

So I decided to make my own let’s-not-ruin-a-pair-of-shoes tutorial using nothing more than duct tape, cardboard, and a bit of tinfoil. 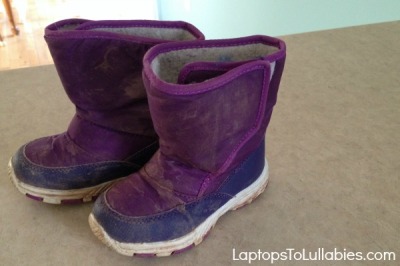 Grab a pair of your child’s existing boots, shoes, whatever. Don’t worry — they will be returned unharmed after Halloween. 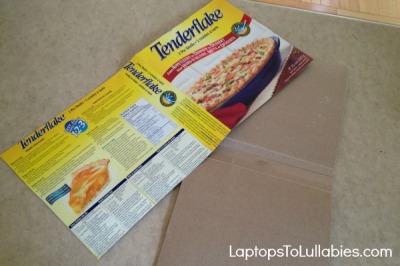 Snag some cardboard from the recycling bin. I guess now you know my dirty little Thanksgiving secret is that I use frozen pie crusts? THE FILLING WAS ALL HOMEMADE and isn’t that what matters? Guys?

Make two tubes out of the cardboard and secure them with duct tape. They should be wide enough to easily fit around your child’s legs, as well as around their boots (if you use boots).

Wrap the cardboard tubes around the boots (or sit them on top of sneakers, flats, etc. and secure them with a bit of tape). I stuffed Lays Stacks cans in the boots to keep everything in place, so the tape didn’t compress the boots and make them narrower. 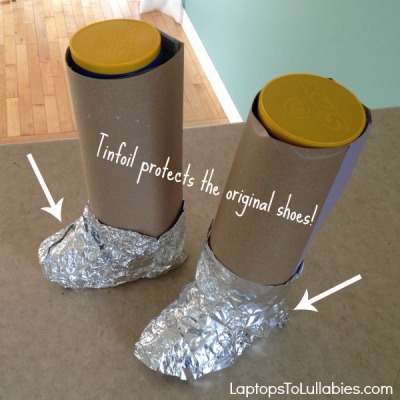 Now this! THIS is the part I felt was kind of genius. Wrap the real shoes/boots in tinfoil so they’re protected from the duct tape. No ruined shoes after Halloween! I know, right? You’re welcome.

The fun part is wrapping the whole thing — cardboard and tinfoil — in layers and layers of your coloured duct tape. I let C help me with every step, even though I cringed to see the tape get tangled up.

Once C had her fun, I wrapped the boots in a few final layers of tape. I used less than 1 1/2 rolls total, so I probably could have squeaked by with a single roll if she hadn’t helped.
(And, ahem, they would have been a bit smoother. But hey, it’s her costume.)

Since the super-tall popstar boots come up to C’s little knees, she was finding it hard to get them on and off by herself. So I cut slits down the back of them (just through the cardboard, not down as far as the real boots).
This makes it easier for her to get them on and off — because she plays in them EVERY SINGLE DAY — and I can always add a final piece of tape to cover the slit before we go trick-or-treating.

Keira boots! There are so many possibilities for these kind of boots, though — superhero costumes, action figure costumes, Ginger Spice costumes — those red boots with the union jack dress 🙂 🙂 🙂
Let me know if you try these. I want to make a pair for myself, but I don’t think they’d be visible under my poofy dress so I’ll stick to glitzing that up instead. I mean, who DOESN’T like to see a giddy 32-year-old strolling down the sidewalk in a wedding dress covered in hot pink tulle?
Happy crafting!
xo

← Dear Surprise Egg videos: I hate you
Five enemies when you work from home →