Our organized toyroom + a board game wall

You guys know that I do a lot of projects, but this has been one of my favourites to date. Mostly because it served three purposes: it helped to empty out our storage closet, it made cheerful wall art, and it inspired us to play more board games together as a family.

You see, we had a collection of dusty board game boxes taking up space in our basement closet. They were always buried beneath a huge plastic tote (or three), so we never played them. They also took up room that we really needed … for more totes. (I have a fabric addiction, and I will not apologize.)

When I saw a pin on Pinterest where someone hung all of their board games as wall art, I was totally inspired. It made perfect sense! Game boards are colourful, they have interesting patterns, and they spend most of their lives hidden in boxes. Let’s put them to good use!

Here’s how we turned a heap of boxes into fresh, functional, nearly-free wall art …

The first step was spreading out all of the games, and figuring out which ones would make the cut. We donated a few we don’t play (I’m looking at you, Risk), and we decided not to hang the babyish games the kids will outgrow in a couple of years (Candy Land, ugh).

I put each game’s dice, timers, playing pieces, instructions, and cards into a labelled baggie, and then tossed the game box itself into a recycling bag. 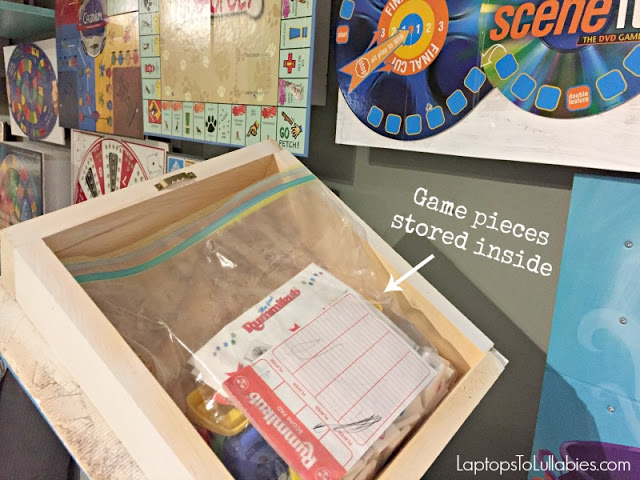 I was also able to trash all the plastic padding and packaging that was inside many of the boxes. I had three huge bags of junk by the end!

When that was done, I turned my attention to the boards themselves. I spread them out on the carpet and played around with the order until I found a nice arrangement — just like I do when I’m making a gallery wall. Then I snapped a picture of the layout with my phone, and turned the boards over to my handy husband.

Because many of the boards were foldable — like good ol’ Pictionary — he cut thin squares of plywood that would give them stability. If the game board was rounded — like Scene It — I painted the plywood, since part of it would be visible. 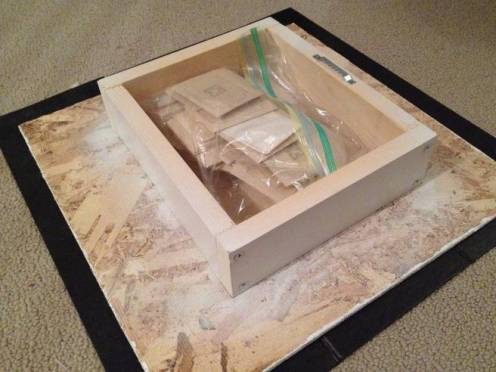 Once each game board had a “backing” piece of plywood, it was time to make secret compartments that would store the playing pieces, cards, and dice. My husband sawed 2x4s into small strips, and then screwed them together to make little boxes — each about two to three inches deep. 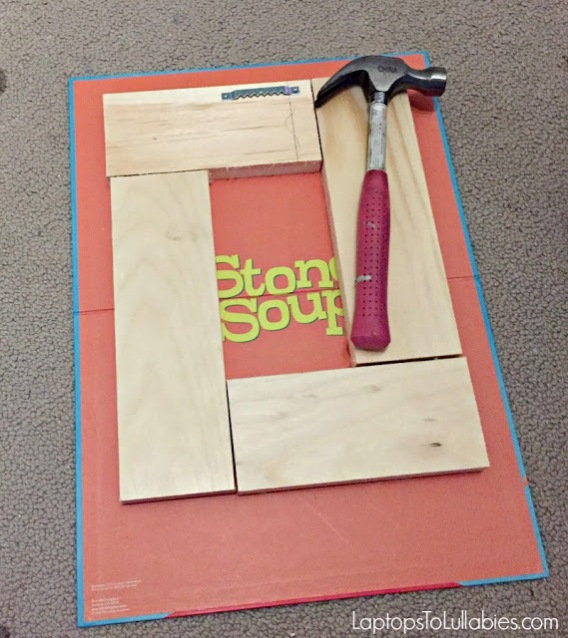 When a box was ready, he flipped the game board over, and drove screws directly through the game board into the edges of the hidden storage box. The screws aren’t really noticeable within the game boards, and the boxes are snugly attached to the backs.

Then he added sawtooth picture-hangers on the back of each box, so they could hang on the wall just like a piece of art. Some of the games were supported by their own plastic frames, like Scrabble and Othello, so they didn’t need picture-hangers. They balance just fine on a screw in the wall.

Finally, it was time to hang our game gallery! Using the layout photo on my phone as a guide, I arranged the games on the floor in exactly the same order. Then I picked up a board, stuffed the baggie of corresponding playing pieces and cards into the storage box, and hung it on the wall. 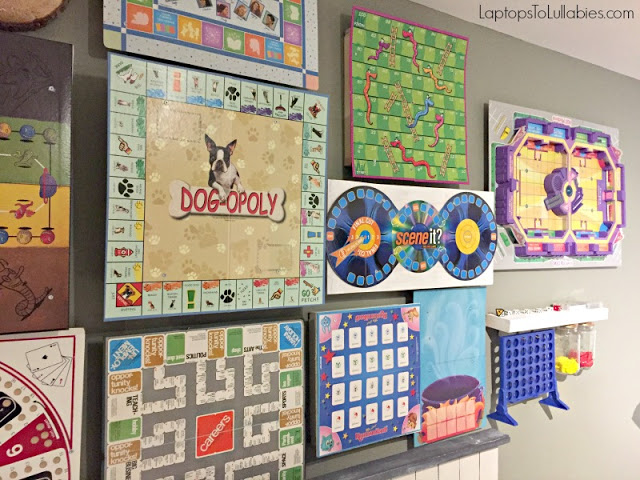 Some the heavier baggies kept falling out of the storage box before I could hang the game, so I hung those baggies directly on the wall screw, and then the storage box simply hid them from sight.

For smaller games without their own board, like UNO, Skip-Bo, and decks of playing cards, we built little storage boxes with pieces of scrap wood. Once you add a sawtooth picture-hanger on the back, you can hang them just like the other games. 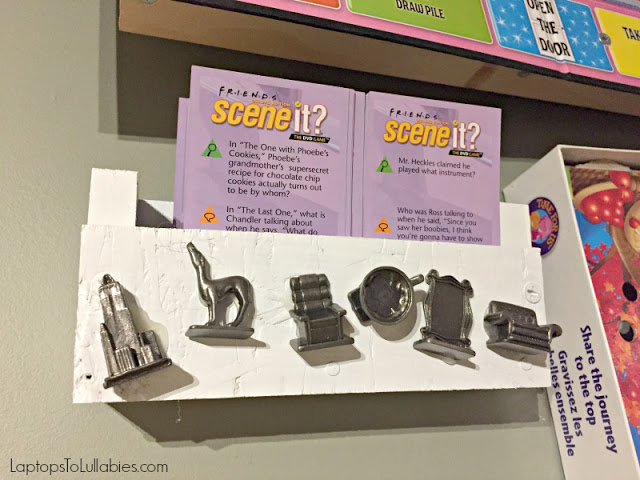 We also use these mini-boxes to store hourglass timers, extra dice, and handwritten cheat-sheets. What?! I can’t be the only person who needs a written set of instructions, detailing each level, every time I play Patience. (It’s no surprise, really, that I am terrible at a game called Patience.)

Our board game wall is complete for now, but we can always add new games on either side — or even above the arrangement.

Because the game are so easily accessible, we’re much more likely to pull one down off the wall spontaneously and play a few rounds. Once I’ve whooped my husband in a game of Careers or Skip-Bo — I mean, when the game is over — the game goes straight back up on the wall until next time. Easy clean-up!

*********
When I posted photos of D’s bedroom refresh yesterday, I realized I don’t think I ever posted photos of our finished basement.
Did I? The archives don’t seem to think so, so let’s see it …﻿﻿
﻿﻿
﻿ 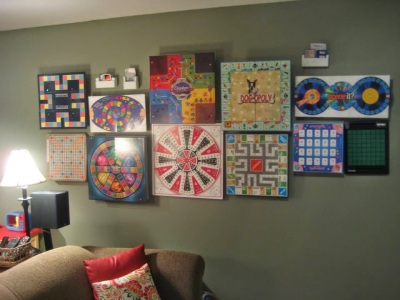 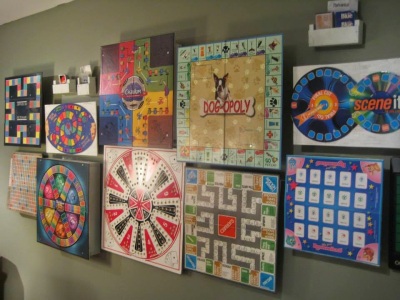 Thanks for stopping by to tour our playroom!

10 Comments on “Our organized toyroom + a board game wall”