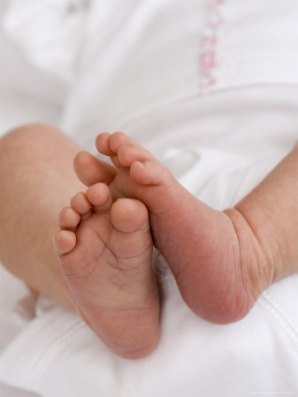 You might think two C-sections would be very similar, but when we had our son, D, back in June of 2010, it was very different.

First of all, I went into labour on my own — one day before his due date — so I went through all the usual stages: early labour, active labour, transition, and pushing. But when three hours (THREE HOURS) of pushing didn’t bring the little guy any closer to the exit, I begged like a dog was given a C-section.

It wasn’t really much of an “emergency” C-section, but his heart-rate was dropping and it was clearly the only option. Something was wrong. The “something,” by the way, turned out to be a very stuck baby head in a very non-yielding pelvis, and he had a mark on his head from driving into the bone.

The whole ordeal was a grueling 17 hours of labour (including three hours of pushing), and it was awful, awful, awful. There were complications. The C-section itself was great, but the whole labour experience was so bad that I made the doctor swear I’d be able to get another one when we had more kids. They agreed I was likely to wind up in the same situation again, so I was definitely able to get one. HUGE sigh of relief from me. And Darling Husband.

So when we got pregnant with Baby #2 — our daughter, C — we knew all along she was going to be arriving via scheduled C-section. Although her due date was May 5, we had a booked C-section on April 25 (at 38 weeks and four days). It was a huge relief.

I wasn’t nervous about it, because I’d been through it before. I thought I might be anxious when I woke up that morning, but no. Super excited! Then I figured I might get nervous once we got to the hospital, but — nope! Still excited!

Once I was changed into my gown and hairnet-thingy, and Darling Husband was looking super-hot in a pair of green scrubs, we talked to two nurses for a few minutes (I think one nurse was training the other). They went over what to expect, and asked questions about my last C-section and this pregnancy.

Then they left, and we just basically got to hang out in a little room and wait to go to the O.R. Darling Husband played games on his phone, I tweeted and Facebooked on my phone. We took pictures of each other on our phones. Thank God you’re allowed to use your phones in hospitals, right? It was all very casual.

The C-section had been scheduled for 8:30, so when that time came and went, I was even more eager. I think it was 9:00 when the nurses returned and said we were all set. When they led me into the operating room, I was so excited I could barely stand it. I hopped onto the table and everyone introduced themselves, and we just chatted while they put in an IV and got everything organized.

I had mentioned earlier that morning about how when I’d had my C-section for my son, D, I had hemorrhaged and lost a lot of blood. So I kept hearing people mention that, and they even had blood brought up to the room, just in case it happened again and I needed a transfusion. Scary! They also kept talking about my low hemoglobin levels (89, I think it was) and how that might come into play. I tried not to think about that.

I hunched forward towards a nurse while the anesthesiologist wiped my back with solution and did my spinal. The nurse and I talked about how I’d made Little Sis paint my toenails the day before. I kept looking over at Darling Husband, but his face was covered with a mask, and I couldn’t tell what he was thinking. I think he was nervous for me. Well, someone had to be!

The spinal started to work quickly, and it felt weird as I lay down on the bed. My butt had a weird pins-and-needles numbness feeling. But I could still wiggle my toes and move my legs around. They waited a few minutes and asked me to move my right leg, and I shot it up in the air. One of the nurses actually yelled in surprise. They all seemed sort of shocked, but said we’d just wait a little longer.

Every time they asked, I could move my legs less and less, but I could still move them — which was a bit unsettling. The anesthesiologist ran something cold down my face and neck, and along my body, and asked me to tell him when I couldn’t feel its coldness anymore. As the minutes ticked along, I felt it less and less, but I still felt it.

Uh, apparently that was “good enough,” though, and we were ready to begin. My doctor — the lovely and awesome Dr. L — breezed in and said hi. She had managed to still look glammed up, even in her surgery scrubs. She had another doctor assisting her, and they literally went to work just minutes after they walked in.

Someone asked me if I was all set, and I cheerfully said yes, and then they informed me we had already started. Oh, um, cool!

There was a sheet drawn in front of me, so I couldn’t see anything (luckily … ew). But I saw the tops of the doctors’ heads, and felt them going at my stomach — one on each side of me. Everyone kept telling me I’d feel a ton of pressure, and I did. It felt like they were having a tug-of-war with the baby, trying to yank her out of my belly button or something.

With my first C-section, I didn’t remember nearly that amount of “feeling” or pressure. Of course, I was so drugged and exhausted by that point that I probably wouldn’t have cared if they pulled him out my nose. I mentioned to the anesthesiologist that I felt a lot, but he just kind of brushed it off and said it was normal to feel pressure, etc. It was occasionally painful, but nothing compared to labour, so I just sort of gritted my teeth and waited.

It was cold in the room, and I was shivering. No one really seemed to notice, except Darling Husband. I had a few warm blankets on my arms, but my teeth were still chattering. It wasn’t the same sleepy, ultra-warm feeling of coziness that I’d experienced with the last C-section.

There were more huge tugs and yanks, and then I heard everyone move into high gear as our baby girl made her way into the world.

Our son, D, had sounded kind of sickly when he let out his first cry, but our daughter had a loud cry from the beginning. It sounded healthy and strong, and I was so relieved. Tears immediately started running down my cheeks. I heard someone announce that she was born at 9:37.

Darling Husband left my side right away, to go take pictures as she was weighed and cleaned off. For a few minutes, I couldn’t see anything but the sheet. No husband, no baby. I just lay there listening to the amazing sound of her crying, and waiting for someone to bring her around the sheet.

I heard someone say her weight was 7 lbs., 12 oz., and I marveled at how small she was. I had expected a giant nine-pounder, based on the trashing I’d felt inside of me. But maybe I’d felt so much because she was so small, and had more room to move around?

There was still a lot of yanking and tugging — it felt like being picked at with a bunch of pairs of tweezers, I remember thinking — as they started closing me back up again.

Darling Husband came back into view, and he was holding our little girl — all bundled up in those white flannel blankets with blue and pink stripes. Just like he had with our son, he held her over my face so I could kiss her soft little face. She looked so much like her brother! She had his sweet little nose (Darling Husband’s nose), and little thin-lipped grimace. But she also had her own features — squishy chubby cheeks, and puffy eyes that looked like they couldn’t even open.

We posed for a family photo — which I would later marvel that was very flattering, because I had a nice pointy chin and none of the double-chin-ness I experienced in the same photo with our son. Darling Husband continued to hold her by my face, and I whispered to her and kissed her.

It was just like when our son, D, arrived, 22 months earlier, only it was different. Only hours earlier, I had wondered how I was going to love someone as much as I love him. And as soon as I kissed her soft little cheeks, I knew I loved her equally.

Everything had changed in one unbelievable instant.
My baby girl was here.