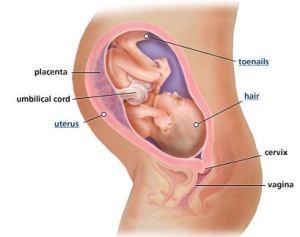 Sunday, April 4, 2010 (Easter)
31 weeks pregnant — now in Week 32!
Week 32! If I could, I would do a cartwheel or something. But I definitely can’t, so how about I just sit here sipping from my ginormous ever-present water glass? And maybe eat a banana in celebration?
I forgot to follow-up on last week’s OBGYN appointment. It was pretty awful, in the sense that Dr. L’s replacement was the devil in scrubs. Seriously.
Her name was Dr. H, and she was a hippie — dressed in an ugly Christmas sweater and sneakers — and spent the whole appointment trying to talk us out of the circumcision. Nice.
She did confirm that there is one doctor in town who does it, we can be referred to him at the time of the birth, and she thinks it’s about $500. She was a total witch, though, so I am PRAYING I do not have her for the birth. I think I would strangle her with the IV.
Other than that (i.e. her), it was a good appointment. His heartbeat was nice and strong, my blood pressure and pee sample were perfect — hooray for no pre-eclampsia — and I’m measuring 31 cm (slightly ahead, but only by half a week). The nurse also said his head was down, which means he’s in the labour position. Hope he stays there!
I go back again on April 13 — only two weeks between every appointment now, eek! — and I’ll be getting bloodwork two days beforehand, to test my iron levels.
Here’s what happening with Baby Boy this week:

Baby’s size: He weighs about 3.7 pounds and measures about 17 inches long! From now on, he’ll gain about 0.5 pounds every single week.
Development: His fingernails have grown long enough that they reach the tip of his fingers. He might even be smiling in there, or sticking his tongue out and making faces. Awww.
Appearance: He’s still packing on more weight, and his face is supposedly rounder and cuter than ever before.