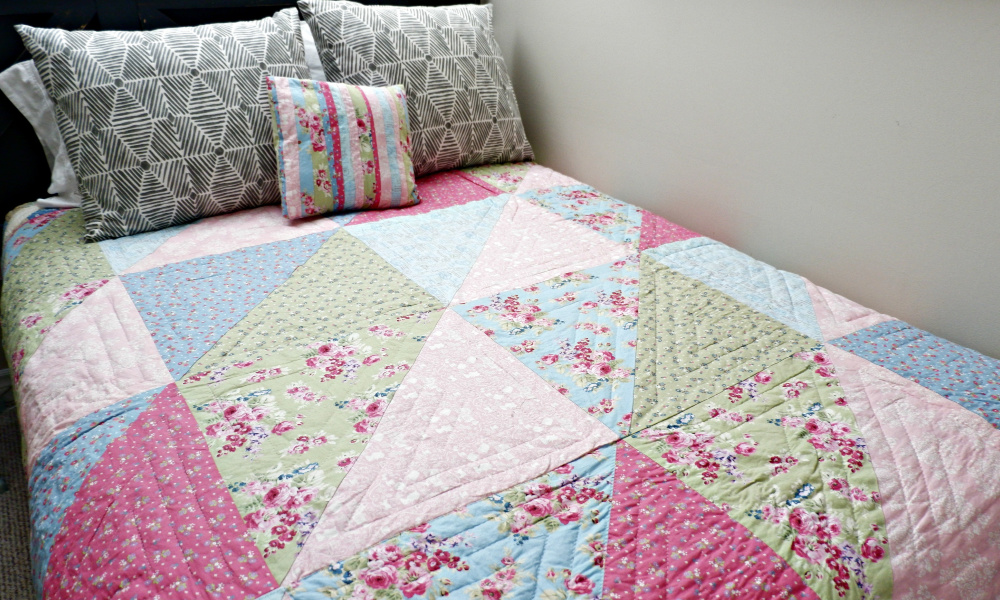 I’ve always loved Anne of Green Gables, so when Penny Rose Fabrics released an entire collection dedicated to P.E.I.’s whimsical redhead, I knew I had to make an Anne quilt. A “quilt of shining colours,” as Anne might call it.

I pawed through the bolts and narrowed it down to my eight favourites: two greens, three blues and three pinks. Most were printed with flowers (my favourite), but one had teacups (another favourite) and another was printed with delicately scripted quotes from the books.

Now, I’m often asked how to figure out how much fabric to buy when you’re making a quilt. Luckily, I’ve developed a system that’s been working well.

People who sew use a term called a “fat quarter,” which refers to a quarter-metre of fabric if you cut it into squares instead of strips. Fabric stores even sell pre-cut “fat quarters” because they’re handy for making small projects. If you were to buy a quarter-metre off a bolt, it would be a long skinny strip instead of one fat square. Make sense?

Since I was making the quilt for our guest room, which has a double bed, I knew I could get by with half a metre of each fabric — four metres of fabric, total. Since I’d cut each piece of fabric in half, it was like I was buying 16 fat quarters.

So if you want an easy formula for making a quilt that fits a double bed, either buy 16 fat quarters or eight half-metres of different fabrics. (If you only want to use four fabrics, just buy one metre of each.)

Once I’d washed and dried the fabric — always important if you’re making something that will be washed and dried in the future — I roughly cut each piece of fabric down the middle, giving me 16 fat quarters.

I could have stopped here and sewn them into a 4×4 grid of squares to make a patchwork-style quilt, but I wanted to go a step further and turn these squares into what are called “half-square triangles” or “HSTs.” (They’re easier and more fun than taxes, I promise.)

I ironed the squares well, then drew a diagonal line through the middle of each (using an iron-away fabric pen) and cut them into 32 triangles. Then it was just a matter of matching up different triangles — pink against green, blue against pink, etc. — by putting the good sides together.

Once I had a stack of doubled-up triangles, I sewed the pairs together along one side — giving me 16 squares again, except this time each square was two different colours. They were still rough squares, so the next step was using my clear square quilting ruler to trim the edges and make them all even.

The finished squares were trimmed to be 18″ wide/tall.

I sewed the 16 squares together in a 4×4 grid, so now I had a quilt top. I sandwiched it together with a layer of batting and plain white prewashed cotton for backing, and added a zillion pins to keep the layers neatly together.

I love quilting by hand, so I spent a few weeks of evenings stitching through the layers with a needle and white quilting thread. I’d used a metre-stick and an iron-away pen to draw triangles inside each triangle of the quilt, which made it fast to quilt because it was just a bunch of straight lines.

When the quilting was finished, I bought a little more of the deep pink Anne fabric, cut it into skinny strips and sewed the strips together to make the binding. Basically you line up the binding and the edge of the quilt (right sides together) and machine-stitch all the way around …

… then you wrap the binding around to the back and hand-stitch it in place there.

The Anne of Green Gables quilt is perfect in our guest room. The colours are light and cheerful, and it goes perfectly with the pastel-painted furniture and light greige walls. I even had enough scraps left over to make a tiny accent pillow! I think Anne would have approved.