This, right here, is the strangest, most annoying sort of plague. 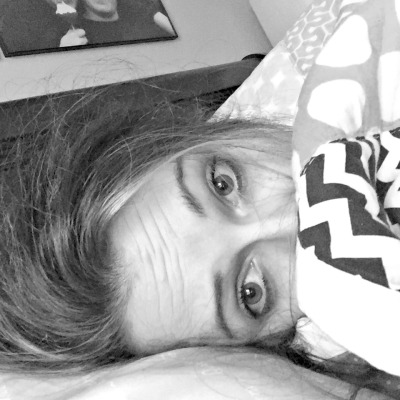 It’s not as terrible as the stomach flu, of course — DEAR GOD, NOTHING IS THAT BAD — but it’s lasting a heck of a lot longer. And the way it comes and goes is very screwy.

It started with a headache on Thursday — the very first day of school. A headache that came on suddenly and had me seeing shimmering things in my vision, which told me it was likely a migrane. I had to skip Zumba and went to bed ridiculously early. Darling Husband was weak and feverish and that should have been a sign of what was coming, but it wasn’t.

Friday and Saturday, I felt off. I went to Zumba (kids and puppy in tow, THAT WAS FUN LET ME TELL YOU) but felt weak and couldn’t really give it my all. We drove into the city for D to attend a birthday party, and I felt exhausted. The kids stayed in the city for a sleepover with my mom, and I numbly drove home.

Saturday evening and most of Sunday passed in a blurry haze of painting lots of furniture and binging Stranger Things on Netflix (which is excellent, BTW). I was tired. I was coughing. I had a fever off and on, I think. I don’t know, I was mostly focused on the show. D’s cough was back, according to Mom, and his appetite was gone.

I slept 10 hours each night, Saturday and Sunday, and still felt exhausted. I was crazy-sick on Monday and had full-out fever hallucinations that night. The puppy was chewing my hair and I thought she was “doing her job” of yanking out doll legs that were tangled inside of it, so it took quite a while for me to realize that, no, she shouldn’t be attacking my hair actually.

I cancelled a city visit on Tuesday because I couldn’t handle 3+ hours of driving. I kept D home from school because he was hacking and feverish and we had all full-out “sick day.” They made jets out of cardboard and crayons. We watched both Batman and Batman Returns because I’d been thinking he might be old enough. He loved them and Charlotte even enjoyed most of them (leaving for the scary parts). No nightmares so far, thank God.

Yesterday (Wednesday) D was full of energy (still coughing, though) and I felt pretty great, other than my own lingering cough. We had a busy day with tons of “firsts” so I was relieved. First morning of volunteering at D’s school breakfast program. C’s first morning of preschool. C’s first ballet class. Everything went fine and I got my work done, and then my body took a nosedive just before dinner.

I slumped down on the living room carpet and realized my whole body was aching, again. My head was hot and my body was freezing. I wrapped myself in a quilt and lay down on the floor for a good 30 minutes before I could drag myself upstairs. Once again, I was in bed for the night at 5:30 p.m. I was so hot that everything I touched felt like ice. Then I thought I was feeling cooler and it turned out I was more feverish than ever.

And that’s when my children decided to spice things up with a little sleepwalking. I tweeted it in a feverish haze because I wasn’t really sure if it was actually happening …

Not sure if it’s a fever hallucination but I just stumbled upon one of my kids asleep on the can with their face mashed against the TP roll.

… Then I witnessed the boy child press his hands on the seat, stand far back, and pee in the most leaned-over weirdness I’ve ever seen.

Everything is hot and everything I touch is so cold so I’m gonna shlep off into this fever now. I’ll be back if my kids do more weirdness. 🤒

//platform.twitter.com/widgets.js Sooooooooo that brings us to today, Thursday — one week after it all began. I feel good, other than the occassional hacking cough. Normally this would be call for celebration, but this WEIRD ASS FLU is probably going to creep up on me later today.

I don’t trust it. It’s possibly never going to go away. Maybe I should just get used to on-and-off fever and chills. It could be my new thing — the sweaty, shaky look?

DID I MENTION ALL OF THIS IS HAPPENING MERE WEEKS BEFORE WE GET OUR ANNUAL FLU SHOT???