The results are in …

I was supposed to get my period mid-week (last week).
It never showed.
I had never been this “late” before.
Um …

Maybe I was … pregnant?
It was a long shot, since we’d been careful, but I had no idea.
So on Friday after work, I went out and bought my very first test. Yiiiiiiiiiiiii, it was exciting!
I guzzled water the whole way home, read all of the instructions, and managed to pee properly on the stick. I got First Response, because I love the commerical — and it was so cool and digital, just as promised. It even flashed a little clock to let me know it had “worked” and it was now processing.
Three minutes later … 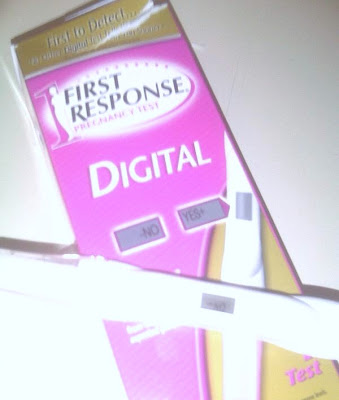 I know it’s blurry, but that is a “NO” and a minus sign. Did I get your hopes up? I must admit, I had some mixed emotions.
I was relieved because …
A) It means I definitely won’t be throwing up at Best Friend’s wedding (which is now two weeks and four days away)
B) It means I will absolutely still fit into my matron of honour dress
C) It means that I am not one of those crazy-fertile people who get pregnant just by looking at someone (because we did not “try” this month, so it would have been a bit alarming)

… and I was a bit disappointed because …
A) It’s the kind of test I always hoped would be positive
B) I do want a baby. So much.
C) It means we will not have a “human souvenir” from our great trip to the States — wouldn’t that have been cute?

My period arrived yesterday. I still have no freaking clue why it was soooo late, but whatever. It’s here. The hilarious part is that Best Friend’s wedding really is shaping up to be C-Day, because O-time is usually two weeks after you get your period.
I know it’s a long shot, but if it does happen in July — the first time we try — then that means my doctor will start counting the pregnancy from FDLP (first day of last period). Which is yesterday!
So technically, if I get pregnant in two weeks, I will have already been pregnant for two weeks. It means I would be one day pregnant now, in a strictly numbers-sense.
Woah!