A few weeks ago I shared how I turned old sticker-covered lockers into cool toy storage for our seven-year-old son’s bedroom.

Now I’m showing you how I took more of those same grungy lockers and gave them a completely different look for my new home office.

The project started the same tedious way — scraping off zillions of stickers. 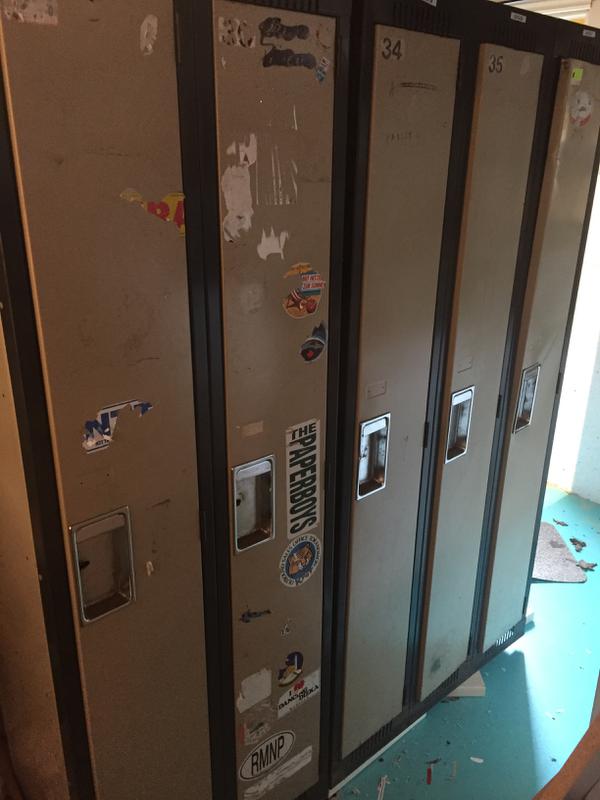 By the end of the task, I could tell how tricky a sticker was going to be based on the style. (The holographic ones were the absolute worst and now I am permanently traumatized by those tiny, sticky shards.)

When it was time to paint the fronts of the lockers, I went with Tremclad Rust Paint (flat white) but it took a disappointing number of coats — like, six, I think. If I was doing this project again, I’d use Fusion Mineral Paint like I did with our son’s lockers, since it’s thicker and covers much better.

Painting the lockers white wasn’t very exciting, but I had some other details planned for them.

Once the FINAL layer of white paint was dry, my handy husband taped off the lock areas and sprayed them a nice warm gold (Krylon Metallic in “Gold”). I was too nervous to get over-spray on the fresh white paint.

Then it was time for construction! We’d bought a pile of 1x3s ($30) and a sheet of plywood ($15) so I could construct a wooden “surround” for the lockers. My handy husband had originally planned to build it, but we had different timelines — mine was more … immediate — and I wound up building the frame myself in less than an hour.

I started by making two tall, skinny “walls” (the height and depth of the lockers). Then I propped them on either end of the lockers — tilting chairs into them so they didn’t fall forward — and connected them along the top with more 1x3s.

With my handy husband’s help, I cut the plywood into two long pieces to cover the frame walls. Then it was just a matter of holding them in place and using our nail-gun to secure them over the frame — making it look like the lockers were surrounded by thick, chunky timbers. 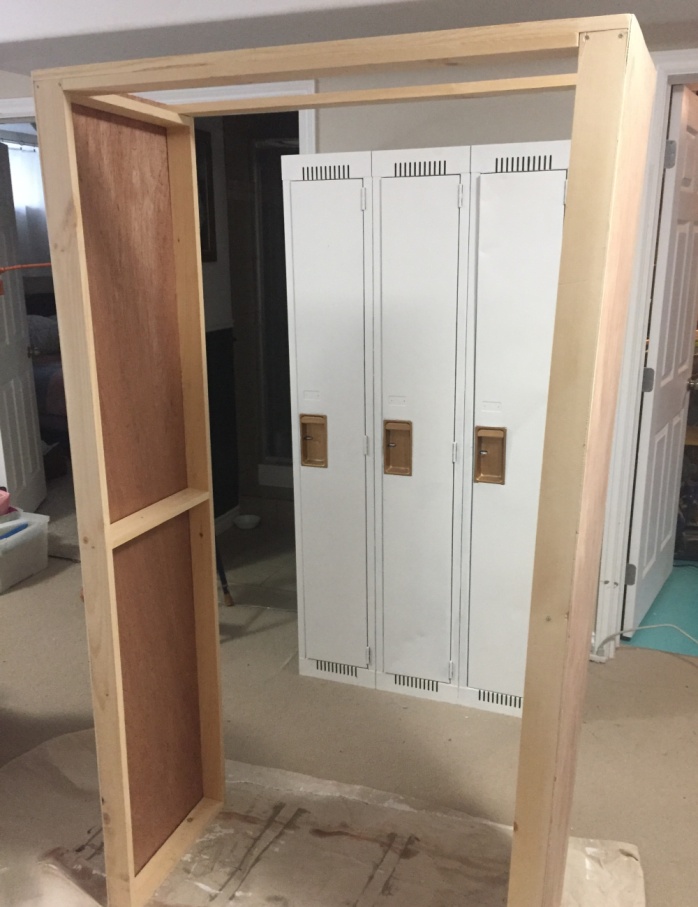 I sanded the surround and then slid it forward so I could stain it without messing up the lockers. Standing in the middle of the room, it was like a weird wooden archway. I was fresh out of foam brushes, so I grabbed a rag and wiped the exterior down with a nice medium stain (“Early American” by Minwax).

I did a couple of coats of polyurethane the next day, and then my wooden “archway” was ready to slide back into place. I love how the dark wood makes the white lockers pop, and they certainly look much fancier.

Since the lockers were in pretty bad shape, I wound up painting the insides with random leftover paint — green, orange, blue, red, anything I had on the shelf. I also added some shelves made of extra melamine board, but left the middle locker open for hanging/storing long items.

My new wood-and-metal lockers provide plenty of storage space in my new home office, and I could even lock them up if there was something expensive I needed to protect. For now, though, I don’t think anybody’s after my collective of picture frames and wooden letters.

Pin this idea for later!

← When your antidepressants backfire
Remembering the ‘baby bubble’ →