The family that Sudokus together

I was working in a newsroom when Sudoku really took off in Canada. I started doing the puzzle in the paper each day. It was excited and new, and everyone was doing it — wait, that makes it sound like something else.

As someone who has struggled with math since childhood, Sudoku really challenged me. It didn’t come easily and I could literally feel my brain firing up in different areas. It was an excellent challenge and I liked it.

Over time, I stopped doing the puzzles. So did most other people, as the fad died off. Coincidentally, this was around the time when phone games really took off, so I guess everyone was too busy playing Angry Birds to try a game on real paper.

I’d forgotten about it until this past Christmas when was I picking up stocking stuffers for my husband. I’d been poring over the magazine selection at the grocery store, trying to find a woodworking one without any luck, when I saw the little book of Sudoku puzzles. He’d always enjoyed them, even more than me, so I stuck it in my cart.

Yet again, I forgot about Sudoku until the book appeared on the kitchen counter months after Christmas. There was a pen tucked inside and I noticed he’d completed a lot of the puzzles! I was shocked because the man is glued to his iPhone or PS4 remote for 90 per cent of his waking hours. (Apparently he’d been Sudoku-ing while cooking dinner one night.)

I carried the book over to the table and decided to try a puzzle for old time’s sake. I remembered how to do it — each grid, and each row, had to include numbers one through nine without any repeats — but it was harder than I’d remembered. I kept pausing, pen mid-air, and not being sure where to find my next move.

Of course, it didn’t help that my husband hovered over my shoulder saying “I see one … I see another one … How can you not see that one?”

“STOP!” I cried, frantically looking at the grids until the numbers swam in front of my eyes. I remembered my old habit of writing teeny numbers in the corners of the blocks that “might” be a certain number.

“That’s cheating!” he crowed from behind me.

“I’m writing down the possible sevens!”

He peered over my shoulder again. “You think almost all of them could be a seven!”

Continue reading in my weekly parenting column, The Mom Scene …

Psssst! Here’s the link to our favourite kid-friendly Sudoku printables 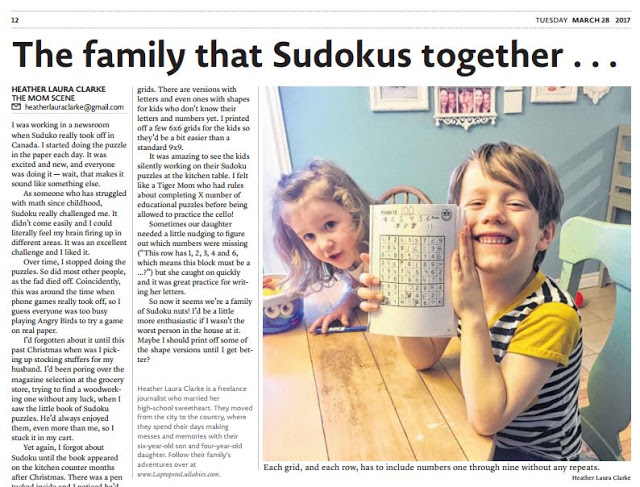 Continue reading in my weekly parenting column, The Mom Scene …