Who has kids?
*pretty much every single reader raises their hands*
Who has kids who are sick ALL THE TIME because of day-care/preschool/elementary school germies?
*Aforementioned parents heave both exhausted arms in the air*
Guys, this is a goodie. I’ve teamed up with Vicks and Braun to offer a super-useful giveway, because TRUST ME — I know how this whole winter/sickness thing goes. (This is Canada, amiright?)
In the interest of figuring out how to combat this never-ending parade of sickness (*cough* I blame preschool), I got to try out the Vicks Starry Night Cool Moisture Humidifier and the Braun ThermoScan Ear Thermometer.
Let’s star with the thermometer … 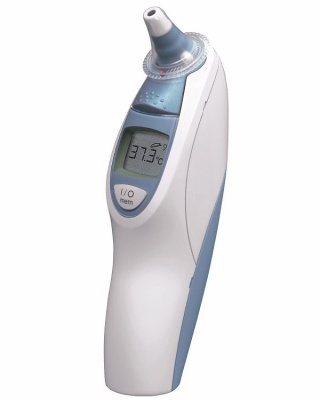 We had an inexpensive ear thermometer back when D was a tiny baby — I won’t say the brand, but it rhymes with Fray-co — and I was really disappointed with it. It stopped working after a year, and when I finally tracked down the itty-bitty replacement batteries, it didn’t help.
So we moved on to a “regular” thermometer, and bought the Vicks Age Smart Thermometer (coincidently, one of the products I was offered to review, but I already had it). I’ve been really happy with it. It changes colours — which the kids love — and lets you choose between babies, toddlers, or older children to get an accurate reading.
The only downside was that both D and C (age 3 and 1) usually REFUSED to put it in their mouth, so I was stuck wrestling them for an armpit reading.
Fevers are one of those parenting situations where I get kind of antsy, because the idea of a febrile seizure scares the whatnot out of me. According to a Canadian health survey, I’m not alone — 64% of parents are scared by their child’s fever, and 70% call a health advice line (like 811 here in Nova Scotia).
D and C never have a problem getting their temperature taken by ear at the doctor’s, so when I got the chance to try another ear thermometer — the Braun ThermoScan — I was excited. No more wrestling feverish kids!? Really?!? 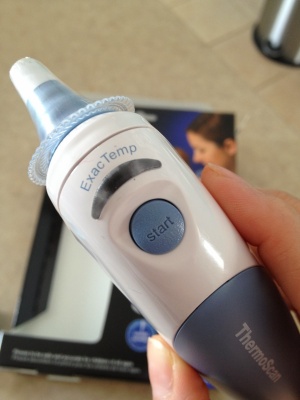 Of course, luck would have it that the kids weren’t actually feverish during my “test time” — which is good news, really? — but we tried it out anyway. It comes with a package of those cool disposable covers (that look like clear witches’ hats, if you ask D) so it really feels like you’re at the doctor’s office.
I popped on a cover, showed it to the kids, and they had no problem with me checking their temperatures. They actually started fighting over who got to be next. Darling Husband and I tried it, too. 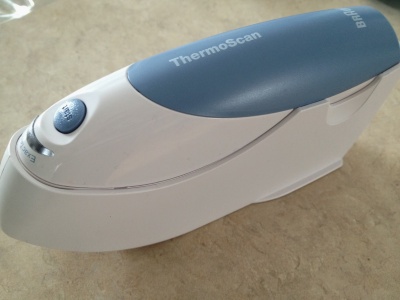 I love the little “docking station” (well, storage case). Is it just me, or does it look like a tiny iron?

Little Miss C sitting quietly to get her temperature checked? Uh, MIRACLE! You just press the button, wait a second or two, and it beeps to let you know it’s all set. I’m so relieved to know I won’t have to battle with them during the next fever.

Now onto the humidifier …

We have the original Vicks Cool Mist machine — we registered for it when I was pregnant with D — and we’ve been happy with it. But we keep it stored on the top shelf of the linen closet, so when the kids are sick, we usually don’t even think to bring it down. Are we terrible parents? Maybe?

So what I love about the Vicks Starry Night Cool Moisture Humidifier is the fact that it’s worth having out ALL the time: because it’s also a light projector. It projects stars and a moon straight up onto the bedroom ceiling, and cycles through different colours in this pretty rainbowy haze.

We tested it out first in C’s room, since I’d already really wanted to get her a projector for her ceiling. I thought maybe it would keep her in her toddler bed, but of course that isn’t going to happen any time soon. I also thought the soothing white noise might be good for her — she already has a sound machine, but LIGHT SLEEPER OMG.

We ran it in her room for two nights, but she didn’t seem too impressed. I was all “Ooooohhhhh, look how pretty!” and she was all “Whatever, Mom. Let’s talk about how you got rid of my climbing apparatus of a crib.”

But D, of course, had been totally enamoured by the projection. So we moved it to his room, and that’s where it’s remained …

It’s got a place of honour on his desk …

I like that you can turn the projector on separately from the humidifier, so you can use it strictly as a projector in between sickness — or keep the moisture on all the time.
The projection doesn’t show up too well during the day, of course, but at night? It’s totally awesome …

D is in love with his new humidifier/projector, and I love that it’s helped with his occasional night-fears about the cleaning products “getting” him (thanks to preschool for the fearful lecture on bleach and Windex).

Leave a comment telling me what you do to get through your child’s illnesses — tips, advice, anything — and mention which product you’d like to win.

One winner will be chosen at random on Wednesday (March 5) and have the product of their choice mailed directly to them. (Canadian residents only, as per the rules). You can also pop on over to the Mommy Knows Best sweepstakes for more chances to win products.

Disclosure: I received product to help facilitate this review, but all opinions expressed are my own.

******************
This giveway is now closed, and a winner has been contacted. Congratulations to “ELYSEES” on winning the Braun ThermoScan Ear Thermometer. Here’s her sick-kid tip:
“Humidifier in the bedroom, oil of oregano on the feet and lots of emergen-c (vitamin). Puffers usually make their rounds here too! 🙂 I’d loooove to win the thermometer. It’s something I always thought would make my life easier!”