Have a little … faith? 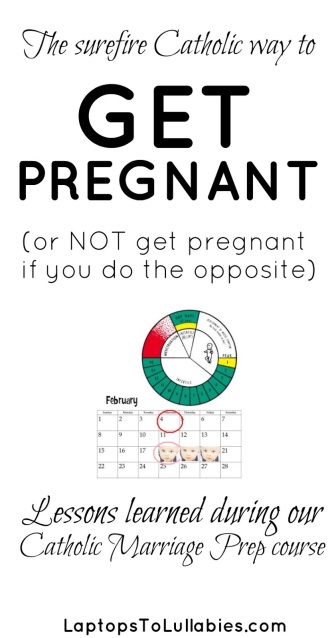 Before a couple gets married within the Catholic church, they have to undergo a little thing called “The Marriage Course.” As a matter of fact, soon-to-be-married Best Friend is on hers today!

At the course, you learn valuable lessons about finances, fighting fair, touching yourself, and securing a mortgage.
Yeah, I said “touching yourself.”
Since having kids is a majah part of getting married in the church, part of the pre-marriage course is a lesson about the Billings Ovulation Method. Observe:
It’s a natural method of “pregnancy prevention and postponment.” Which basically means that if you don’t want a baby yet — the church would never consider “ever,” but the accept “yet” — you do not have sex on any of the “baby” days (i.e. the ones with babies). And if you do want to conceive, you aim to have sex on the “baby” days. Everybody wins! 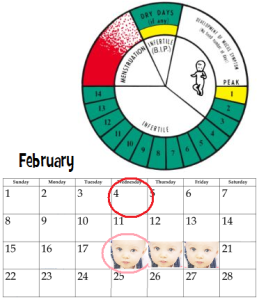 Science is really Little Sis’s strength, not mine, but basically it works by the woman touching herself everyday and recording how, ah, her “down-theres” feel. Don’t want to gross you out with TMI, but basically wet means baby-makin’-a-go-go, and dry means you won’t get knocked up.
Since the cycle depends on each woman’s individual goings-on, it’s not an exact science — yeah, obvs. But ovulation is about two weeks after the first day of your last period (see the cute calendar I made), so technically that is when you should not have sex unless you want a bambino.
Back when Darling Husband and I attended the marriage course, I was totally intrigued and wanted to go off the pill immediately. He was … how should I put this … extremely, really, and totally against it?
Since I’ll be officially off the pill in one week, it’s safe to say we will not be following this method. I somehow — somehow — doubt it’s as effective as a Trojan!