I hate admitting this, but … 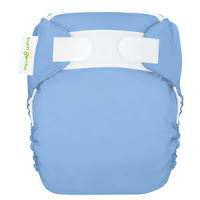 Because he’s a cloth-diapered babe, I do need to change him once or twice during the night. Otherwise he wakes up in a wet sleeper — and sometimes with a puddle on the mattress. Poor soggy guy. 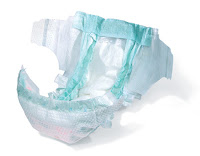 It kills me to say that. I love-love-love our cloth diapers. I just can’t quit them, to quote that movie I never did get around to seeing. But I am thinking that maybe … maybe … I need to switch to disposables only at night?

I have tried hard to make this nighttime situation work. I’ve double-stuffed them (mmm, Double Stuff Oreos). I’ve tried different kinds. They just don’t hold as much pee as disposables, according to, well, everyone on the damn internet.

Lovely bloggy crushes like Leah and Melissa also cloth-diaper, and then use disposables only at night. They admitted that cloth just doesn’t cut it overnight, and settled on a solution that worked.

I think it is my (extreme) stubbornness that is holding back. I am the one who insisted cloth-diapering was the sh-t (pardon the pun).

I am the one who had PLENTY of skepticism from the peanut gallery family members when I said I wanted to cloth-diaper.

I am the one who STILL will tell anyone who will listen how much I love our fluffy, adorable little diapers.

I walk down the baby aisle at Wal-Mart and sneak peeks at the Pampers — simultaneously scowling at the idea of paying for diapers and feeling a twinge hopeful that maybe they are the key to me getting more than two or three hours of sleep in a row.

So I hate admitting it … but yes, I sort of am. Without saying it. You know what I mean. It’s possible that I might need to make a change in the diaper department, strictly at night — you’d still have to claw those cute printed cloth diapers from my cold, dead hands during the day.

The question is, will I cave? …

Will I start using disposable diapers at night?Market Research

3 Comments on “I hate admitting this, but …”